Skip to main content
A A A A A

Love of Sports Plays a Big Role in His Community Participation

Ricky is an ardent sports fan and enjoys watching as well as participating in sporting events. A graduate of Central Dauphin East, he supports his alma mater by attending Panthers’ sports. When his brother played for the University of Maryland football team, Ricky was one of the Terrapins' biggest fans.

He regularly bowls with friends and staff from United Cerebral Palsy (UCP) through its CPS Alternatives program. Ricky and his longtime friend Nick often get together to shoot hockey goals inside the Giant Stadium in Hershey. The two met in elementary school and have been best friends ever since.

Through CPS, Ricky has developed relationships and is a recognized member of his community. He and Nick work as volunteers with the Central Pennsylvania Food Bank where they help prepare donations.

"Loneliness is the only real disability."  -  David Pitonyak

Ricky has support from friends, family members and his Dauphin County neighbors. He has neighbors who love and care about him. While on a recent shopping trip to Marshalls, a neighbor saw Ricky with a new staff member from UCP who was unfamiliar to her. She called Barb just to assure herself that all was fine.

Ricky gets out in his community often, but his preferences are field trips to local museums, shopping, theater performances, advocacy events, weekly bowling, and the yearly Sports Jamboree sponsored by Paxton Pioneers at Fort Indiantown Gap. His friends from Sports Jamboree will soon gather for a Christmas party. Ricky also goes four-wheeling and fishing with family. He still keeps in touch with two of his former teachers. They meet for dinner, recently choosing to meet at a Mexican restaurant.

Ricky is interested in employment and indicated he would enjoy working as a greeter at Hersheypark. There are some complex support and medical needs that must be part of planning new experiences for Ricky, but he tries new things. He has learned from his mother that everything is attainable; it depends on the effort you give it. With natural and formal supports, Ricky builds new skills, develops new relationships, and finds new ways to move from just being in the community to being a valued part of it.

Listening is so much more than listening with just our ears!
Listening requires our whole body. 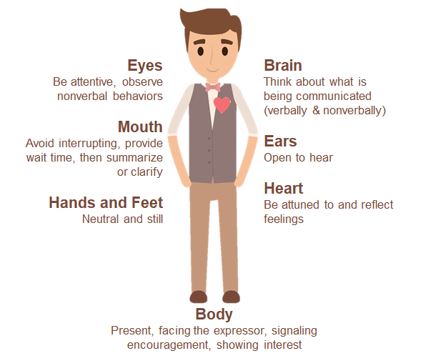 By listening with our whole body, we are giving those we support more opportunities to understand and express messages!

For more information on the Communication Corner, please contact the Special Populations Unit at RA-ODPDeafServices@pa.gov

Self Advocates United as 1 — Antivirus Power Connect Calendar Webinar: Let’s Talk about Your Vision for YOUR Everyday Life.

Self Advocates United as 1 — Antivirus Power Connect Calendar Webinar--Let’s Talk about Your Vision for YOUR Everyday Life.